Crimea fills people with power, healing them, renew confidence in themselves, recover their feet and opened their eyes to a life… To a real life that is filled with the sun and wind. With the moments, when you realize what is important and what is fleeting. In Crimea, any person can find something that will help him/her live on. Places of power, majestic mountains, the Black Sea, extremely clear sky and of course the springs that can heal. Today, “The Crimean Magazine” decided to tell about five most revered and wonderful holy springs of the peninsula. Obviously, there are plenty of them and may be, we will return to that topic more than once.

Spring of Saints Cosmas and Damian

“Almost all the temples of Crimea emerged above mountain springs, whose curative power and sacred significance is recognized both by Tatars and Christians”, — a local lore specialist and ethnographer Yevgeniy Markov wrote in his “Sketches of Crimea”. The tenement of Saints Cosmas and Damian located at the foot of the rock massif Chatyr-Dag is one of the most respected temples on the Crimean land (by the way, the tenement is considered to be the highest-mountain temple of the peninsula). It was built near the spring of Cosmas and Damian and the local population believed that water of the spring cured all diseases. The second name of the water source is Savlukh-Su that is translated as “water of health” from the Crimean-Tatar language. According to the legend, unmercenaries brothers Cosmas and Damian, who treated people for different illnesses, lived at this place. There was a superstition among the locals that the saints were killed and buried up the spring near two identical beeches. The legend states that after the death of the brothers, a local inhabitant, who hated his wife, took her to the mountains, plucked her eyes and left her there. The poor woman was found by two unfamiliar men, who told her that they were doctors and brothers Cosmas and Damian. They led her to the spring and ordered the woman to wash her face. After that, sight returned. Nowadays, researches conducted by scientists showed that besides magnesium, manganese, the source’s water contained lithium and silver that occurs rarely in natural sources. 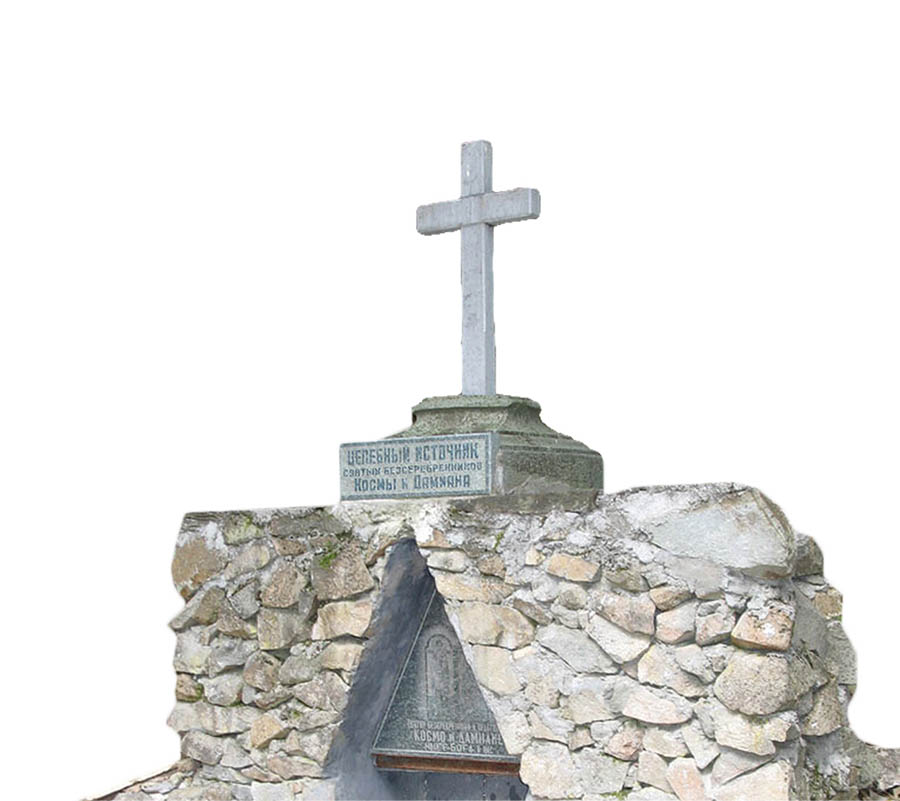 At the beginning of the XIXth century, dwellings for pilgrims were built there. One merchant from Simferopol, who was healed by water, established a block house in gratitude here. In 1856, a male monastery was situated there. Believers and people seeking for healing flock to the monastery to the miraculous spring on 14 July, which is the Day of Remembrance of the holy unmercenaries and wonderworkers Cosmas and Damian. How to reach the spring of Saints Cosmas and Damian: the spring of Cosmas and Damian is located at an altitude of 700 meters above sea level in the central hollow of the Crimean Nature Reserve, it’s just 10 km west of Alushta. Access by car to reserve is restricted. You can reach the place by tour or private bus after receiving prior a permit from the administration of the nature reserve in Alushta (telephone number: (36560) 5-04-40, +79780842918). The only day, when everybody wishing can visit the territory of the Cosmas-Damian monastery is 14 July, which is the Day of the holy unmercenaries Cosmas and Damian.

Another miraculous source, which is widely known beyond the borders of Crimea, is located not far from Topolyovka settlement. It is named after Saint Paraskeva. Local habitants believed that Saint Paraskeva met his martyr’s death — her head was cut off, right here in the desolate natural boundary of Toplu. When righteous martyr nourished the earth with her blood, the source started erupting from the bowels. The spring turned out to be healing (it was especially good for eye diseases). Annually, suffering people flock to this place on 26 July, which is the Day of Saint Paraskeva.

Church services with blessing of water were held, people put water in vessels and brought them back home. The evidence of sanctity of the spring was the appearance of an icon depicting of righteous martyr Paraskeva in it. The saint was depicted to her full height, she was holding a bowl and healed eyes were inside of it. Later, in 1778, that icon was transported by Greek settlers to Mariupol, where it was stored in the Church of the Nativity of the Blessed Virgin Mary and it saved the city from cholera. 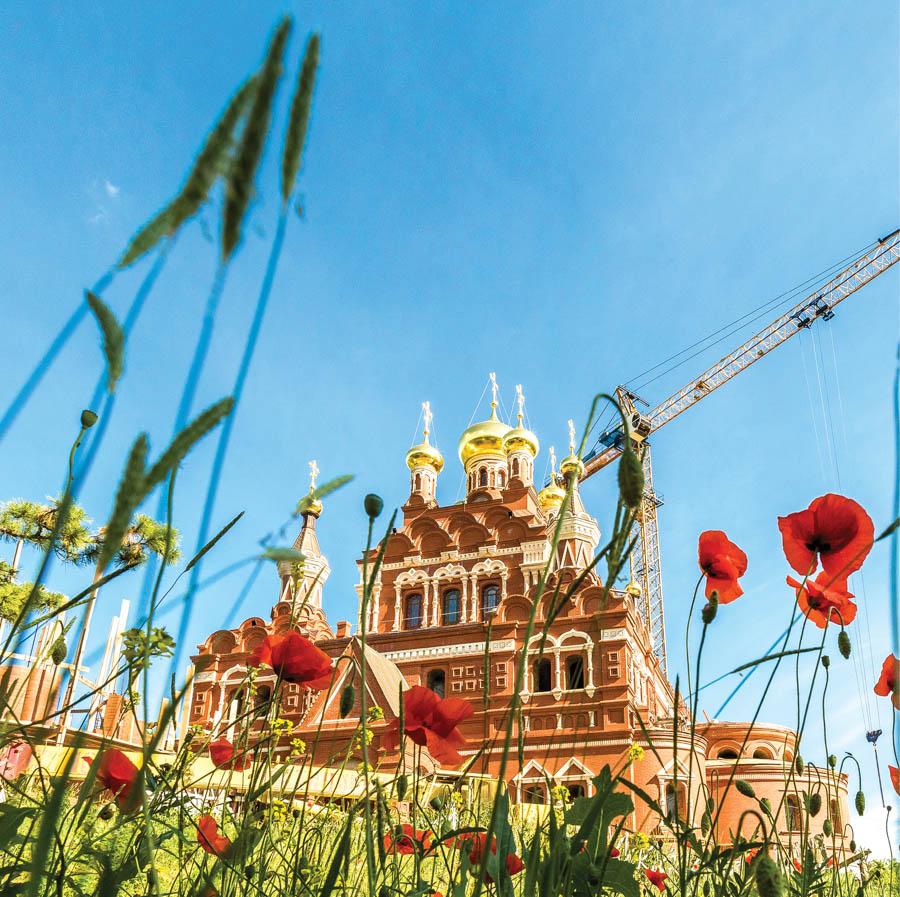 In 1864, the Holy Trinity St Paraskeva Toplovskiy Convent was situated near the spring. Nowadays, there is a gated font basin next to the spring of Saint Paraskeva. Visitors can dive into its water both in summer and winter (however, it can be closed for cleaning days on Mondays and Thursdays). How to reach the source of Saint Paraskeva: the Toplovskiy Convent, wherein the spring is located, lies 70 km from Simferopol (in a direction of Feodosiya). You should get to Topolyovka village. You can go to Topolyovka from the Simferopol bus station “Kurortnaya”, which is near the railway station, by buses going to Feodosiya, Sudak, Koktebel and Kerch. The travel distance from the bus stop to the convent is 1,5 km (there will be a direction sigh on the track ahead and turn on the convent), you will have to walk this way on foot or travel by meeting transport.

The natural boundary Kiziltash, which is located in the most picturesque place that is called “Crimean Switzerland” by travelers is 15 km of Sudak towards Feodosiya. It is surrounded by huge red rocks, which its name derives (Kiziltash is translated as “red stone” from the Crimean Tatar language). There are two caves in the natural boundary. The miraculous source of Saint Stephen Surozhskiy shoots up in one of the caves, called Krasnaya. The story of the source is following. They say, in the summer of 1825, a herdsman from Otuzy village (current urban-typer settlement Schebetovka) was shepherding sheep and decided to hide from thunder in the cave grotto. When he was in, he saw the icon of Our Lady in the depth of the grotto, in the pond of the small source. He took the holy thing and brought it to a Greek merchant, who passed it to an archpriest Joseph. The icon was framed it with silver and installed in the Church of Saint Stephen Surozhskiy. At the present time, a location of that icon is unknown but back then, word of mouth about its wonderful acquisition immediately spread the whole peninsula and Orthodox Christians started flocking to the holy site. 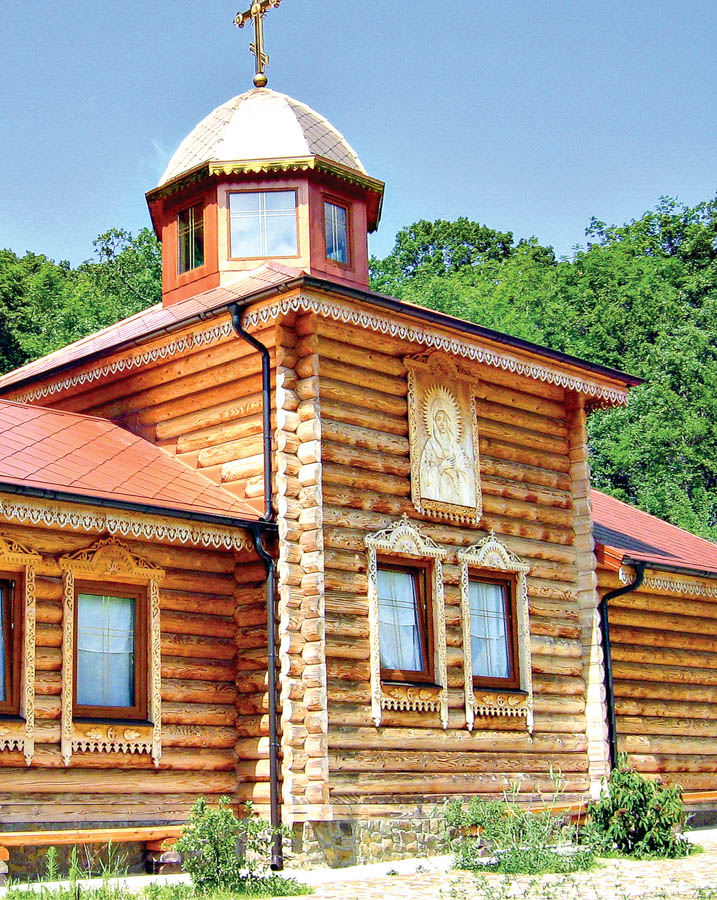 Since that time, plenty of piligrims were gathering in the natural boundary of Kiziltash in the Day of the Dormition of the Mother of God (15 August) — priests from Sudak came here and celebrate the liturgy right in the grotto. After the foundation of the monastery in the name of a priestly martyr archbishop Stephen Surozhskiy in the 1850’s, the brotherhood hold annual prayer services with blessing of water in the Day of Dormition. The spring, where the icon of the Mother of God was achieved, became the sacred one. According to numerous testimonies of those years, that water healed many people, who suffered from eye diseases, deafness and nervous maladies. Moreover, the mud from the bottom of the marsh, which is located slightly beneath the spring, was considered to be useful in the “treatment from body pains”. Suffering people put the mud on their bad legs and arms and after that the pain was gone. How to reach the source and monastery of Kiziltash: the buses to Kiziltash from Feodosiya go from the central market (a shuttle bus Feodosiya-Urochische). You can also go there by a shuttle bus from Schebetovka (you can reach Schebetovka from Feodosiya, Sudak and Koktebel). Tourists can also travel there by private car after turning a car from the road Sudak-Grushovka in the direction of the village of Krasnokamenka. When you are in Krasnokamenka, you will need to pass by a military base, beyond the which one a monastery is located, — there are signs installed along the trail leading to it.

Spring of Saint John the Baptist

This source is located near the settlement of Oboronnoye (former Kamary) in the Balaklavskiy District and considered to be the only revered Orthodox Christian place that is associated with John the Baptist. According to the lore, the spring shot up here several hundred years ago in the day of beheading of John the Forerunner — 11 September. In 1848, the Church of St John the Baptist was built above it. A big old frog lived in the church pool of the source, where holy water flowed in. The frog floated to the surface when any visitor entered the temple and the local population treated it as a keeper of the sacred spring. After the establishment of the Soviet power, the church was used as a cattle pen and it was slowly being destroyed, but during the Great Patriotic War, the temple was hit by a hostile shell. However, after the desecration and destroying of the church, the local folks secretly continued attending the source. Annually, prayers from the neighboring villages gathered here on 11 September. 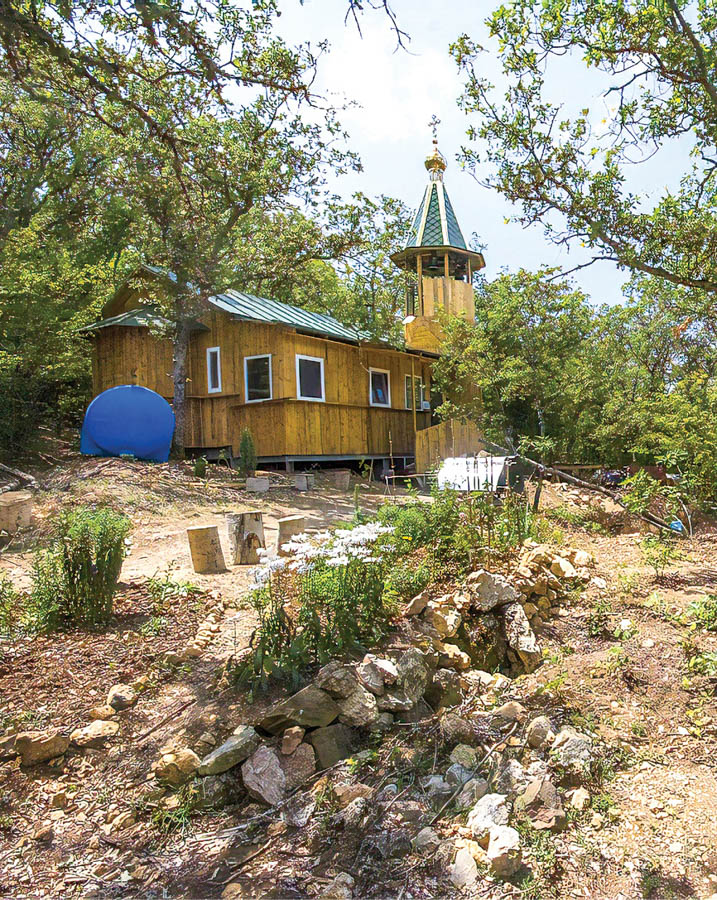 Closer to the present, the tapping of the spring was restored, a font basin was built and every year, people flock to this place in September in the day of beheading the prophet. How to reach the source of Saint John the Forerunner: The village of Oboronnoye is situated four kilometers of east — north-east of Balaklava. The turn on Oboronnoye settlement from the Sevastopol-Yalta Highway is located 5 km from the Yalta Circle. You will need to go on foot 15-20 minutes from that circle. Tourists will have to travel by asphalt road leading from the village to the former top secret facility called “Sotka” (complex of anti-ship missile coastal positions “Object-100”).

The source of Saint Anastasia Stritzoula or Ai-Anastasia, as it is also called, is revered in Crimea since the middle ages. It is located in the Church Cave Grotto (its other name is the Grotto of Saint Anastasia) of the rock massif Kachi-Kalion, which is 8 kilometers of Bakhchisarai. The legend states that long time ago, saving her herd, a local girl Anastasia died in the caves of Kachi-Kalion — she fell victim of snakes and monsters, which lived there. The rock crashed down on the monsters and in the morning, a stream of the purest spring water came through the stone — that was the tears of Kachi-Kalion, it mourned over the dead kid. Since then, the source named for Saint Anastasia is considered to be sacred and it is still one of the most revered springs in Crimea. 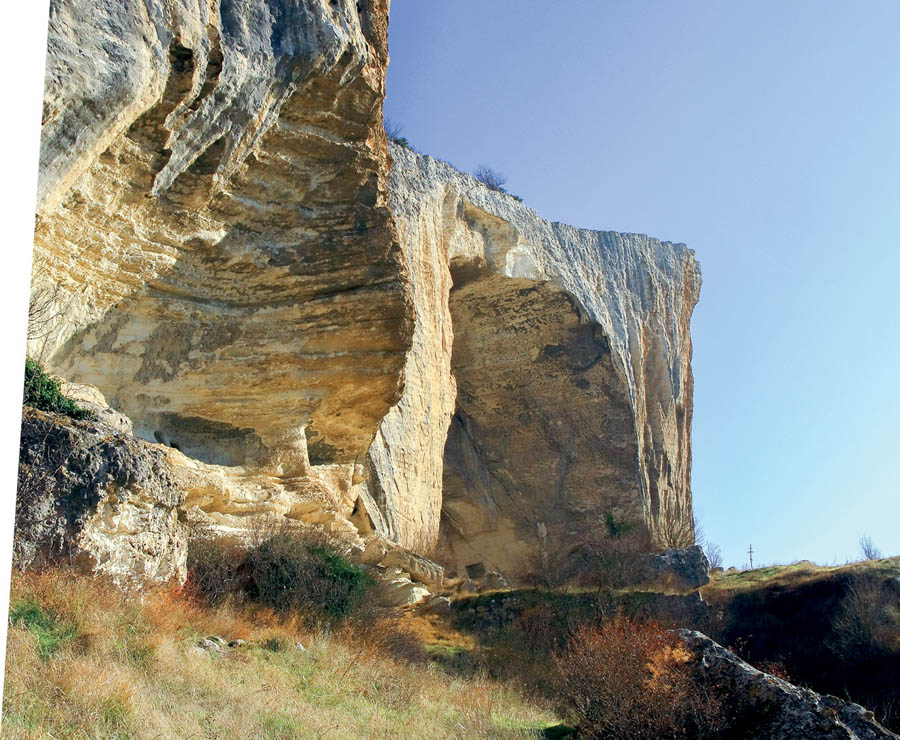