Crimea as a Mecca for birdwatchers

Not by hunting alone…

Birdwatching, in other words, amateur ornithology is a passion, which steadily embraces more and more people in different parts of the world year by year. Birdwatcher can become a duke, a locksmith, a businessman, an actor – anyone at all… Some countries have already transformed this type of ecological tourism into profitable item of state income. The cost of ornithological tours is much higher than cost of regular resort tours.

NOT OUT IN THE COLD

For example, during the flying season, small Israel observes the pilgrimage of both birds and tourists. An ornithological loop route has been created here, each station is equipped with special shelters for birdwatchers and photo-animalists, from where they observe and take photos of birds at close range. Once, the Israeli farmers did not like the dances of cranes on seeds. But it was popular among tourists, and the government decided to compensate landowners for losses. The migration routes of birds also pass over the Crimea. And the peninsula, take it from me, at any time of the year may become a paradise for the fans of the avian world. Birdwatchers from the post-Soviet and far abroad countries come here, though not on a massive scale. For the present they are only private visits where the hobby-companions find each other over social networks and travel together. By the way, a birdwatcher from Germany discovered the greater sand plover on the lake Ajigol that is near Feodosia, though this bird had never been met in the Crimea before.

On the salt lake Kyzyl-Yar, located on the western coast of Crimea, next to Evpatoria, before the hunting season there is a real paradise for birdwatchers – rookery of Red Book species: ibis, pond heron, ferruginous duck, sandpiper stilt, at times pelican and shelduck come here flying – but as soon as hunting starts, the lake becomes deserted.

The term «birdwatching» appeared in 1901, after the publication of book “Bird Watching” by Edmund Selous. “Birdwatcher” is not very euphonic word for the Russian language, sometimes they say “amateur ornithologist”. But this scarcely ever reflects the essence of the concept. After all, ornithology is a science, and birdwatching means mostly contemplation of birds and delight in birdsongs. And it’s close to a fanatic desire to meet as many different kinds as possible. Sometimes the birds-lovers really and truly serve science, discovering new facts of nesting, wintering, appearance of birds in a specific region or even new species for a given region. Birdwatching as a phenomenon has existed long before the name came to it. For example, the landowner Joseph Shatilov, whose estate was located in the Nizhnegorsky region of the Crimea, was a great amateur ornithologist and did a great deal for science. In Soviet times no one called himself a birdwatcher. But the birds were of course devotedly observed … especially by the boys. Thus, Professor of the Crimean Federal University, one of the Crimean Red Book editors-in-chief, Sergei Petrovich Ivanov, since childhood has been obsessed with watching birds. He admired the songs of blackcaps, they sure sing just as well as nightingales; he knew under which river pebble the kingfishers brood the offspring; he made a nest-box where the wryneck settled.

OUT OF A CLEAR BLUE SKY

A young black stork made the day for Simferopol birdwatchers in November 2016. Unexpectedly it landed on Salgir. It is well-known that in the early last century people were ruining the nests of these birds. Perhaps, they were led by hobgoblin terrors of black birds. From that moment on, even ornithologists have no idea where the black storks breed offspring in Crimea. It is assumed that they do it in the forests on the Crimean reserve territory. One day a stork, bearing in its beak twigs for building a nest was seen here. Young birds are regularly met in this place. And recently it was found that after all in the reserve one found a black stork nest, which was abandoned. Simferopol stork fattened with a small-fry on the river, and then vanished away as suddenly as it rushed it. But the Crimean photo-animalists Tatyana and Dmitry Zherebtsovy have made amazing shots portraying even half-tones of a bird each and every feather.

Photo-animalier art is akin to bird-watching, but more fabulous, because this is art, coupled with tremendous labor. The photographer shoots from a hide – camouflaged hiding-place. He is waiting for hours for a good light and attractive angle, he is calculating the flight line. Tatyana and Dmitry have a secret cubbyhole up in the mountains, where they can watch the vultures and the griffons from a ten-meter distance at most. In front of them the mighty birds are bathing in natural rocks baths, getting into ruckus and even sleeping. In the parts of the planet with developed ornithological tourism, the special shelters are built for such purposes. In our region on Karabi-yaila for example, it is possible to get wants and needs met: to organize the feeding of vultures and other birds-scavengers and to equip the birdwatching lookout point.

Such points in Crimea can be created far and wide. The key point is to provide serenity for the feathered race: forbid hunting in such places. The Saki region holds a unique lake Kyzyl-Yar. Here the Zherebtsovy have recorded the appearance of a great blue tit and azure tit (white azure) hybrid. In our region such a little atom of a bird was noticed for the first time ever. On this lake before the hunting season there is a real paradise for birdwatchers – rookery of Red Book species: ibis, pond heron, ferruginous duck, sandpiper stilt, at times pelican and shelduck come here flying – but as soon as hunting starts, the lake becomes deserted. After all you shouldn’t forget that after the shutoff of the North-Crimean canal first and foremost the limnetic and semiaquatic birds suffered, they lost their habitual feeding areas. Nevertheless, there would be enough ponds and lakes in Crimea. But from late August to January the hunting is allowed. A duck sometimes cannot even land on the water… 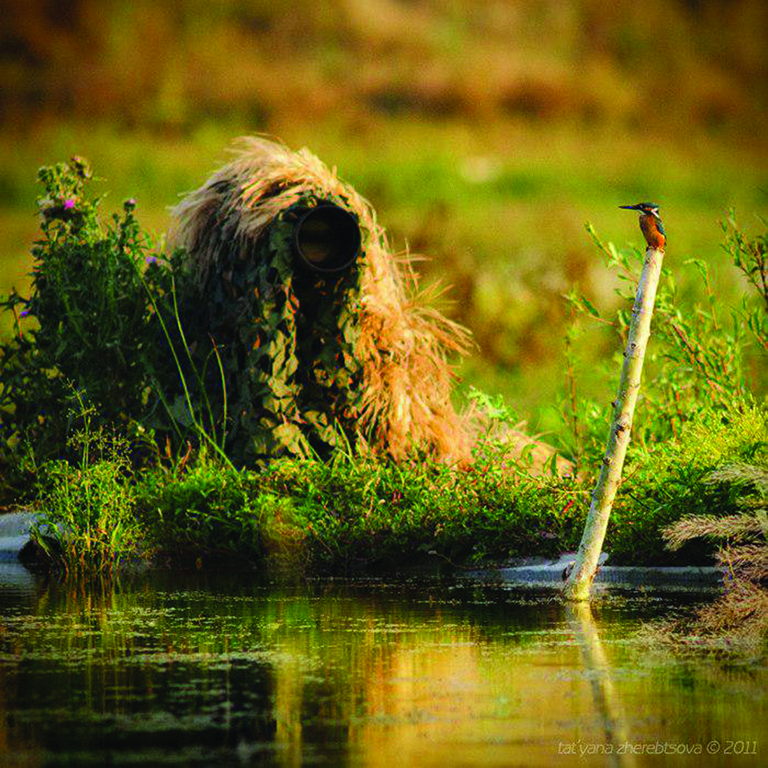 Striking fact. Even in the second half of the 20th century, the Crimean avifauna was considered to be very meager. Famous ornithologists visited the peninsula from time to time, but only in brief business trips or on holidays. But the actual study of the Crimean ornithofauna began only after the arrival of the ornithologist Juliy Kostin in the Crimea in 1958. Nobody expected that we have such a variety of birds. To be honest, Crimea hasn’t got any endemic species, but we have many subspecies, and these birds differ from their brotherhood by both feathers and birdsong – to cut a long story short, by exclusive characteristics that are so appreciated by those who watch the birds. You can meet on the peninsula the subspecies of a firecrests, jays, long-tailed tits, robins, coal titmouse…

Ornithological tours on the peninsula are organized once in a lifetime, but those who had an opportunity to be on such trips are still surprised by remarkable birds that live here! Just to name all three representatives of coraciiformes: kingfisher, common bee eater, roller – they will cut any parrot above the rest. And what about glossy ibis! It seems like these maroon-brown, iridescent satin green extravagant beauties with witch curled beaks come from other planet. At the edge of the Crimean yailas, the rufous-tailed rock thrushes build their nests, they also have fairy feathering: blue head and neck, orange chest and mottled white back. And how this rock thrush sings! It seems like someone is playing the flute.

In the steppe during the mating ritual, the mighty bustards fluff out their tails, also the little bustard nests here, that is one of the rarest birds on the peninsula. The great-crested grebes are synchronically dancing on the lakes. And in the sea, the loons, lying straight on their backs, clean their feathers – they are real equilibrists! Almost every Crimean city has a place for “hangouts” of urban residents and birds. In Sevastopol this place is the Omega Bay. During the winter here myriads of swans, seagulls, bluebills, grebes… Also in this place you can meet birds that are very rare in our region – stifftail, bullhead and even the red-breasted goose. Simferopol residents come to the Salgir embankment and to parks with bread, because during the winter here are real duck “cafes”. And near Evpatoria the swans come ashore to take a treat right out of hand.

The early winter of 2016 in Crimea was marked as the feast of the all birdwatching souls. Five flamingos arrived at once. For the third year in a row, they have been wintering on the salt lake of Yarylgach (Chermomorsk region), which is considered to be the fifth largest lake in the Tarkhankut peninsula. Before that they were met near the Feodosia. The ornithologists supposed that once in a while these birds could escape of the reserve “Askania-Nova” (Kherson region of Ukraine) or a private zoo. But the regularity of wintering can indicate that the flamingo is looking for new migration routes. In this same area, a flock of red-breasted geese landed on the seeds, and two ostriches were seen near the district center. These feathered giants have clearly escaped a local ostrich’s farm. They stand almost no chances of surviving in the wild. Every Crimean birdwatcher or photo-animalists has a dream: to meet the Spanish sparrows, see with own eyes the cattle egret or a snowflake. And the epic dream – to meet the wallcreeper. Only one of its flight visits was registered in the Crimea. This bird looks like an exotic butterfly! Its nearest habitant places from the Crimean peninsula are the mountains of the Caucasus. But the bird gods move in mysterious ways. Let’s hope that the wallcreeper will honor Crimea with its attention. In Crimea you’ve surely got someone to direct not rifle, but binoculars, a telescope and a camera. Ecological tourism is gaining all the more popularity in the world. And, undoubtedly, it is worth developing on the peninsula. The Crimea has all the opportunities to become a Mecca for birdwatchers and photo-animalists.

Crimea is usually divided into two regions that oppose to each other according to the natural conditions: the lowland-steppe and mountain-forest. This explains the rich species composition of the avifauna in our region. Steppe, forest-steppe, forest, sea, rocks, various fresh and salt water reservoirs and human settlements are the habitats of different species of the bird empire. Crimea is called “a world in miniature”. And, if you take a look at the species composition of the Crimean avifauna, it will confirm this conception. On the peninsula, the offspring of birds that nest in Africa, Australia, North and South America, Eurasia, India … and on all continents, except for Antarctica, are breeding. The Crimea has registered totally about 340 birds species, and these are hundreds of thousands of birds. Some reside here all year round, others appear only during summer or winter, or even met only during autumn or spring flights. Migration routes cross the Crimea, and birds flying from other countries make a stopover to rest, gain strength, and feed themselves before the long journey. Just imagine, 60% of all Europe species composition of birds is registered on a small area of the peninsula (26 thousand square kilometers)!