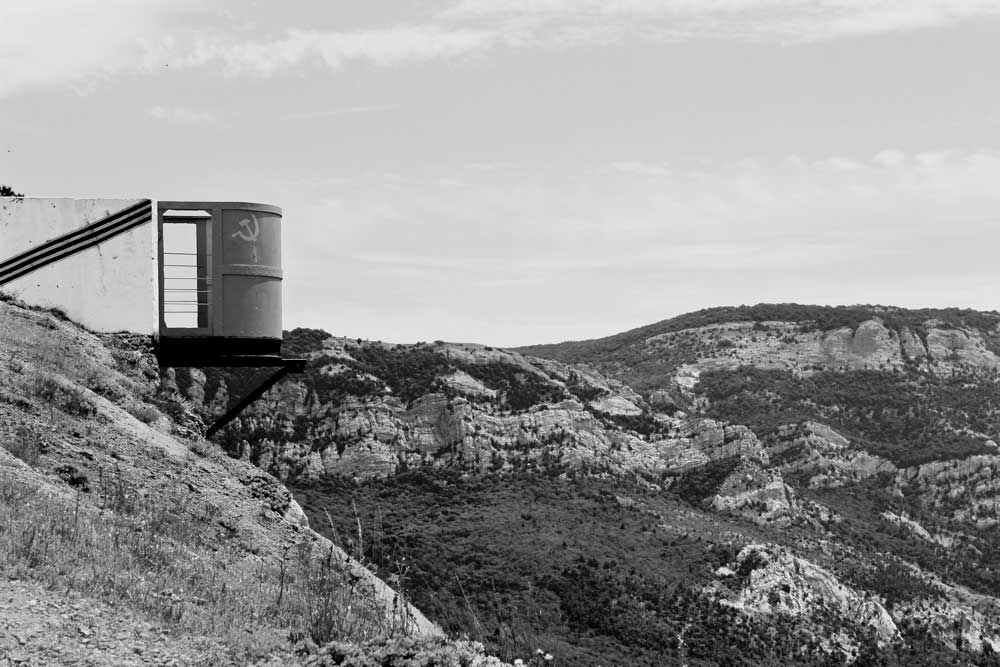 The region of Crimea occupying the most important place in the center of the Black Sea was always a tidbit, which bloody wars and under-the-carpet intrigues were waged for. It’s quite natural that the peninsula was acquiring fortresses, fortifications, stashes and secret facilities. “The Crimean Magazine” decided to tell its readership about such several constructions. But we should warn you that visiting of major part of them can be life threatening and health hazard.

An abandoned alternate command post (ACP) of the Black Sea Fleet, which is officially designated as the “Object 221” and known among locals as “Alsu” can be probably called a gold standard of secrecy.

The huge underground bunker inside of the rock of Alsu at Mount Gasforta near Sevastopol was started to be built in 1977 due to the fears of execution a nuclear strike on the main base of the Black Sea Fleet.

The primary task of the ACP was to manage the fleet to carry out a retaliation strike. Beyond that, the “Object 221” had to become a shelter for families of officers of the Black Sea Fleet. The enormous bunkers located under the rocks were able to accommodate up to 10 thousand people

“plenty of secret military installations in Crimea are not forsaken. A part of those facilities didn’t stop operating and another part of the military constructions was restored.”

The approach the issue of camouflaging of colossal construction activities was very interesting: the official line was that a defense research institute operated at the rock of Alsu and that’s how building operations and increased security were explained. The entrance (to be more precise it was a driveway) to the tunnels was located in the sham concrete frame of that research institute.

The construction of the “Object 221” wasn’t finished — it was abandoned in 1992, though the facility was ready for 90 percent. Nowadays, some travel firms guide excursion groups to “Alsu”, while the bunker is slowly looted for iron.

A word combination “a secret Soviet nuclear base” has become a habitual cliche in films and computer games. Crimea provides its guests and residents with an opportunity to visit such a base in reality. However, it’s not an air base in Bagerovo (the Leninskiy District). Though atom bomb carriers were stationed there, but air control tower and landing strip are not of the utmost interest. The thing refers to an underground base situated in the boundary of Kiziltash near Sudak, which is known as the “Object 76”.

It wasn’t a trivial “atom bomb warehouse”, but a full-fledged factory on building such military items. It was a true underground city. The point is that nuclear warheads of the first generation were not only expensive fragile armaments, but they can’t be stored in assembled form either. It was required to build bombs before use. One of such “assembling stations” was created within the Kiziltash Boundary (between Sudak and Feodosiya). However, it was exploited even after building bombs before using was no longer needed due to the technological development. Warheads were disassembled and disposed here.

“The “Object 76” was designed for surviving even in the case of a nuclear strike. The base was protected both by the earth and construction’s sizes. Main and reserve electric substations were situated rather far from each other. Designers resorted to such a positioning to save one of those stations in the case if the object is struck by nuclear missile”

The “Object 76” consists of four underground tunnel shafts (the central one, 7-a, 7-b, 7-v) and many support rooms. For example, the central adit is a vast “horseshoe” near two kilometers long. The base was designed for survival even in the case of a nuclear strike. It was defended by the earth and sizes of the construction. Main and reserve electric substations were situated rather far from each other. Designers resorted to such a positioning to save one of those stations in the case if the base is struck by nuclear missile.

Implementation of security was typical for a film “secret base”. The perimeter of the “Object 76” was guarded by armed patrols with dogs and forest was controlled by dodgy sensing elements which were able to locate not only a person, but also a small animal like a hare. Moreover, the village of Krasnokamenka that served the base was registered as “Feodosiya-13”, “Simferopol-32” or “Enterprise mail box 105”. As for Kiziltash Mount, it wasn’t marked on open maps.

Military personnel left the base in 1996. However, there are two guarded burial grounds keeping radioactive materials on the territory of the former “Object 76”. The rest territory of the secret object was de facto abandoned.

Another type of a “secret object” is a hidden missile base. Well, even such facilities can be found near Sevastopol. The “Object 100” or “Sotka” that is how it’s called by locals is a battery of coastal anti-ship missiles deployed near Sevastopol.

The construction of “Sotka” was finished in 1956. Two launching pads, both of which could fire four missiles at a time, emerged at the villages of Oboronnoye and Rezervnoye. Despite the fact that the distance between the missiles platforms was almost 6 kilometers, the facilities were connected with underground tunnels: a tunnel started from a general storage that is hidden under the rock led to each launching pad. Missiles were transported to launching sites by the railroad that was put through these tunnels. Missiles platforms were deployed at an altitude of half of kilometer above sea level what increased a shooting range significantly. The missile guidance stations that were covered by concrete and rock were located higher. At the same time, none of the constructions of “Sotka” was visible from the sea.

“Sotka” had more than a full life. Missile firing exercises on a regular basis. As for the complex, it was constantly modernized. In the late 60’s – early 70’s, it was drastically renovated: since then, launching units, which looked like the ones that the Soviet guided missile cruisers carried were placed on the platforms. Being a secret object, “Sotka” was spotted in the film industry: it portrayed a secret US missile base located at a distant island.

“Sotka” became the property of Ukraine in 1996 during the division of the Black Sea Fleet. The complex fell into decline with each day notwithstanding the efforts made to restore the facility in 2009.

After the returning of Crimea to Russia, the part of “Sotka”, which is located in Rezervnoye, was succeeded to be restored. The positions in the village of Oboronnoye were not subject to renovation, thus it’s rather easy to reach the area. However, you shouldn’t stray onto the guarded area.

Crimea was aspired to be protected in Tsarist times. After the defeat in the Crimean War, the Russian Empire lost the right to possess the navy in the Black Sea. It made both Crimea and coastline of the Sea of Azov defenseless. Due to that fact, it was decided to block the Kerch Strait by coastal batteries’ fire. The works on building fortifications were started right after the war – in 1856. The construction of the fortress, whose main fort got a name “Totleben” (don’t confuse it with Fort Totleben in Kronshtadt) had been finished by 1872. The cannons of the coastal batteries didn’t give hostile warships chances to break through the Tuzla Spit and Cape of Ak-Burun (coastline of the Kerch Strait).

An ammunition storage and penal battalion of the Black Sea Fleet – simply say it was a military prison, were stationed within the fortress after the revolution.

Nowadays, a historical and cultural reserve operates on the territory of the fortress. Official excursions to the dungeons are even arranged and sent to. Nevertheless, a major part of the tunnels hasn’t explored yet. It’s not recommended to visit them – bomb disposal engineers find hundreds of artillery shells and mortar rounds.

Another unique coastal fortification called the “barrel of death” of the fort of Southern Balaklava hangs over the Silver Beach.

A half-round construction made of plate armor with gun-slits in the floor and walls controlled approaches from the sea and was due to allow defenders to shell on enemies at the beach without hindrance. Notably, there were two gun nests originally, then the concrete foundation of the second one was destroyed and multi-ton “barrel” crashed to beach. 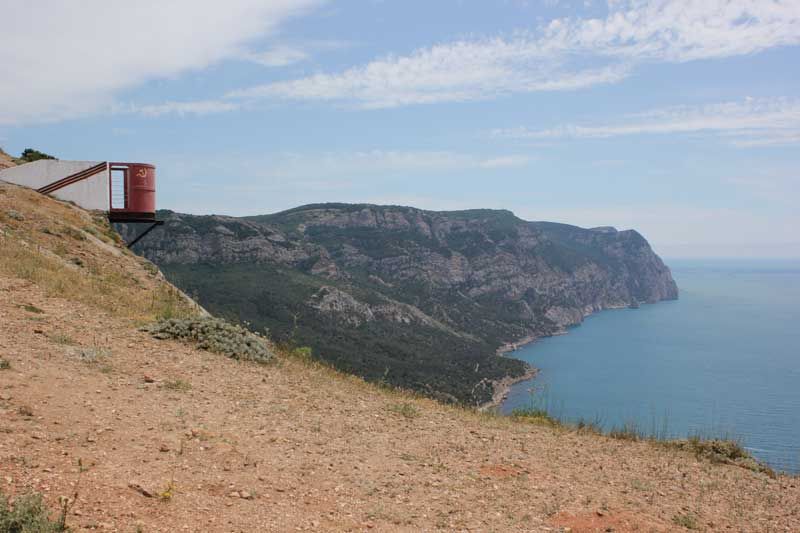 According to the urban legend, red commissars were being executed by shooting in that “barrel”. Bullet spots at the head height on the inner side of the barrel confirm implicitly that legend, but documentary evidence is absent.

Currently, “the barrel” fills with some misgivings — the concrete foundation is cracked all over. It’s possible that the fortification can share the fate of the second gun post. At the same time, the Silver Beach is a popular resting popular… Concrete casemates of the fort of Southern Balaklava are located near the “barrel”. Though these casemates can be of interest, but they are not so unique like the grim “barrel of death” is. 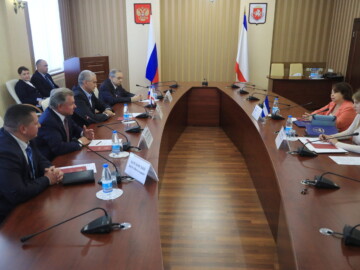 Yevpatoriya and Crimean War
Смотрите также
Columbus of the Taurian land: Pyotr Pallas in the history of Crimea
Forgotten masterpieces: architectural monuments from the Crimean outback
Crucial decisions were made here: history of the governor’s house in Simferopol