The strongest thirteen in the crimea: to fall in love from the first sight while searching for harmony.

In the sky — the shrilly and deep one.

In the wild beaches — where you are on the cloud seven.

In architectural monuments — being unimaginable beautiful.

In sunsets — as though being intra-dimensional.

In the mountains — unconquered and great ones.

In castles and temples — garish and native.

In the air — piercing and tasty, like champagne from Noviy Svet.

In the cuisine — with chebureks and mussels on the beach.

We have drown up the TOP-13 of the most famous and top-requested places of power in the peninsula among esoteric tourists. The different Crimea exists. Without the stereotypes. The Crimea – the place which has only the sunbeaten deserted steppes and for miles and miles – not a soul to meet. Where blows a piercing wind, scorching your face. The Crimea is a holiday, and the Crimea is a solitude. Crowded, being careless in a resort place style – and lonely, abandoned.

One of the beloved places of occultists and esotericists. It is located in the south-east of the Crimea. The cape name is translated from Greek as a “big house”, but none of the ancient settlements were found here. The deserted rocks with a minimum of vegetation barely invite to it. But they say that UFOs like to visit the Meganom. The ghosts set their hearts to this place: they say that at night you can see a boy here who is calling after him and can lure the credulous people into the sea. Another ghostlike inhabitant of Meganom is bleating lamb at the edge of the cliff. (By the way, the real pets avoid these places.) Another strangeness of Meganom is the yellowish rings on the grass, visible from the height. From time to time they fade, and then people who happen to be in their radius become sick as a dog. But then the rings gain the color again (sometimes they can even shine at night) and during this time period become available again, they are followed by those seeking force and energy. Those who practice meditation say that it is the Meganom where you can make transitions to the past or to the future, to travel to parallel universes. 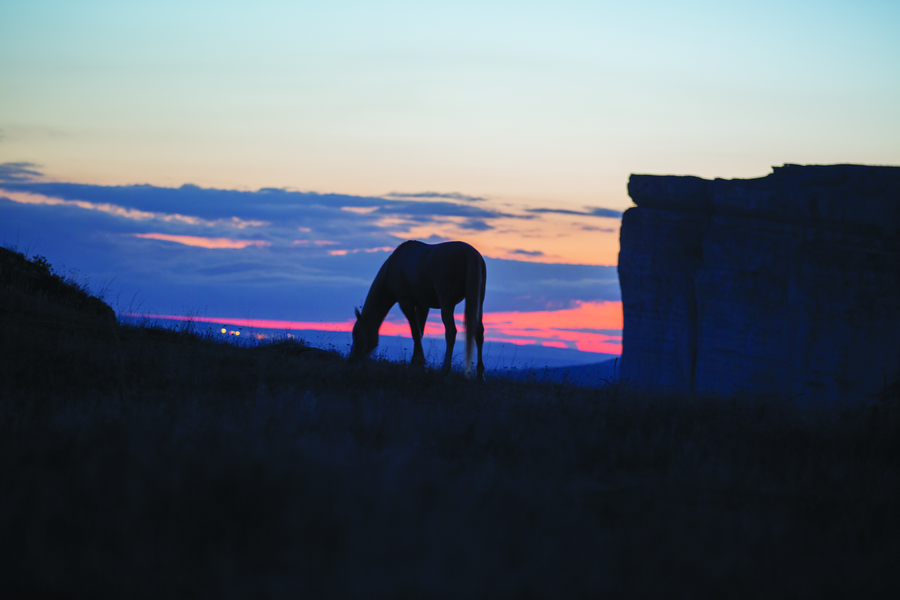 The largest cave town in the Crimea. It is located in the south of Bakhchisaray district. People used to live here from the III to the XV century. Right now there are only few stones left and the powerful energetics of this place, which served for such a long time as a refuge for the generation after generation. They say that during the winter on the Mangup it is possible to observe luminous neon balls. They hang in the air at a height of one and a half meters for about ten minutes, and then just dissolve and disappear. Mangup has its own ghosts. The legend has it that on the eve of the Turkish invasion in 1475, a boy lived on Mangup. His family died while defending the city. The boy escaping from the enemies found himself on the razor edge. The Turks rushed to him but the rock parted and swallowed the baby. And now in the quiet moonlit nights you can hear the children’s crying and see a white figure among the trees: this boy wanders around the ruins of his native city and looks for his parents. They say that if you hold your eye on him you will look up from the boy – you will go after him and step into the abyss.

That’s how they call an unusual stone ensemble on the Ilyas-Kaya Mountail (close to the Laspi bay), reminiscent of a giant opened flower. The stones are arranged in such a way that the first sun ray falls exactly into the core of the “flower”. At first glance it seems that the Temple is not in too inaccessible place, but only those who are really ready to visit it and who are allowed by the supreme powers will be able to get to it. If you happen to be among those lucky ones, try to find the central stone of the “flower” – this where the main place of power is. Having climbed on it, ask a question or make a wish in your thought. It is said that the answer will come right away and the wish will be realized immediately. In return you can leave in the Sun Temple any souvenir or maybe a small gift.

The Rodnikovskoe village (Sevastopol), next to which they are located, used to be called Skelya hence there comes the name. These are vertically standing stone blocks covered with moss and age-old cracks. At their roots the people performed the rituals two or three thousand years ago. Now there are two menhirs: 2.8 m and 1.2 m height. It is believed that these stones have a healing power: they stand at the points of negative energy accumulation and transform it into a positive one. This energy can be felt by hands in the truest sense of the world: when you touch the menhir, you will feel a slight tingling in your fingers, and a warmth wave will pass through your body. 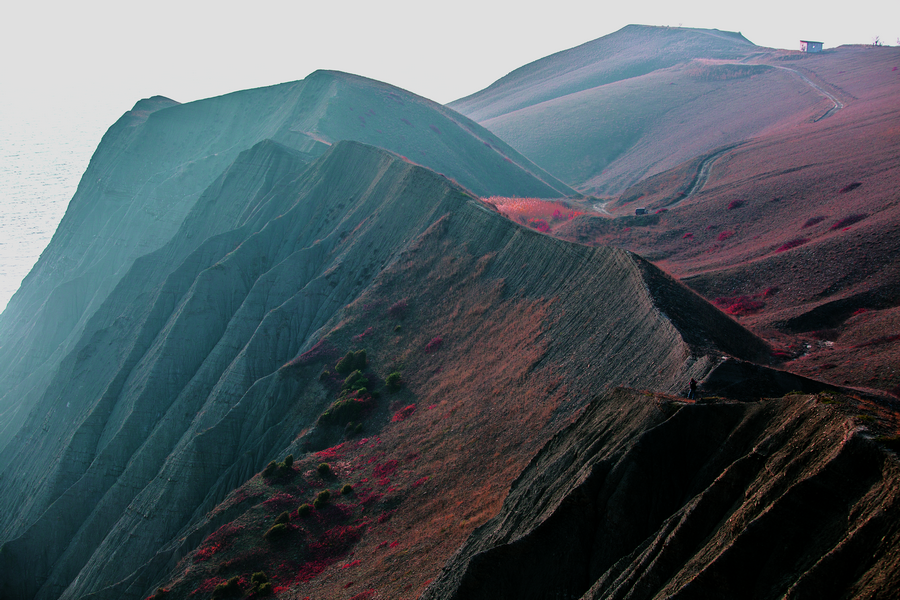 This massif mass near Feodosia is considered to be the most powerful place of power. A sleeping volcano throws waves of both positive and negative energy into space. At the foot of the Karadag, people have long been settling and for centuries its mysterious soul has been attracting artists, poets and musicians who have fine appreciation to the world. There are strong magnetic anomalies on Karadag – there are places where the compass needle begins to gallop like crazy one. One of the massif mass ridges is called Magnetic. To some people it plays a healing effect and they come year after year to Karadag to “recharge the batteries”.

The only cave in the Crimea through which an underground river flows. It is located in Simferopol district. The valley near the Red Cave is considered to be a very strong place by energetics. At night you can see lights shining in the air. And four times a year when one season replaces another, some people manage to see the “the fire-bird” near the cave – a cloud of luminous energy resembling a winged beauty by its shape. Close to the cave there is the Su-Uchkhan waterfall – the bathing in its icy water helps to preserve the youth and strength. Above the waterfall there is a meadow where the view for the mountains opens taking your breath away. This is a place of special harmony, suitable for meditation.

The Dolmens are called the ancient structures generally composed of four stone slabs placed on the arris and covered with a fifth slab. Our ancestors used to build the dolmens at the point of positive energy exit and concentration. In the Crimea such structures are found near cave towns, but the biggest number of them is on the Koshka Mount near Simeiz. They say that dolmens are a kind of gateway to other worlds. Being next to these huge stone cubes (1.5 x 2.0 x 2.0 m on the average) a person feels peace, receives answers to the questions tormenting him and finally can even understand his life mission. 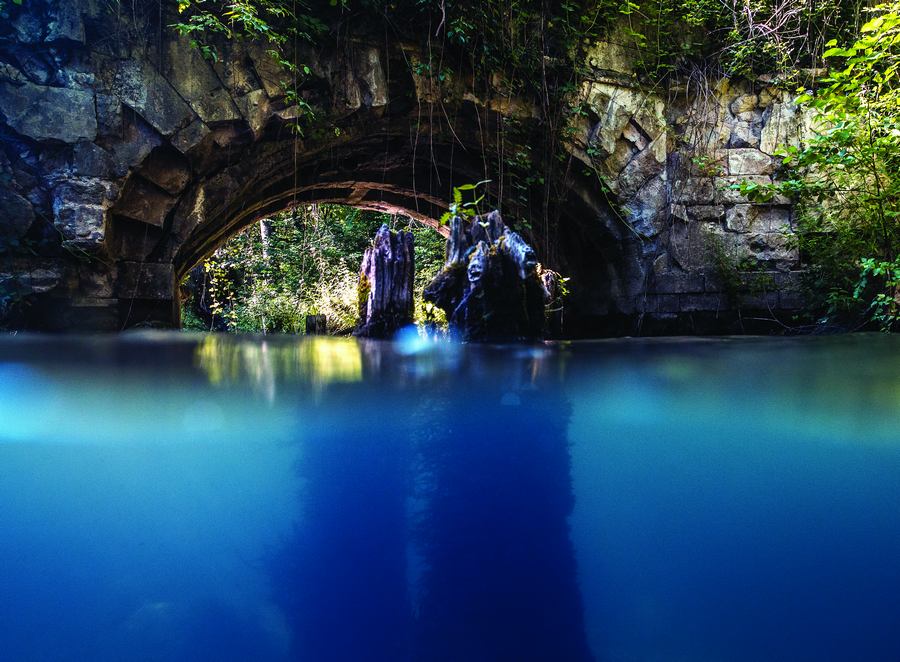 The ghosts valley on the Demerdzhi mountain

It is believed that here (10 km from Alushta) the energy flows intersection is located. People who are unprepared better not to go here – it is possible to observe the terrifying images. To be hones the skeptics claim that it’s just freakish rocks that take on the strange shapes in the fog. Another special Demerdzhi feature is that the time sensing is lost on its slopes: it seems to a person that he has been here for only five to ten minutes, but in fact a half an hour had already passed.

The Ak-Kaya Rock (The White Rock)

Is rises above the valley of the Biyuk-Karasu River in the Belogorsky district, reaching at its highest point 325 meters. In these places the centuries-old history of the Crimea is concentrated, and of course such places have a special energetics. People used to settle here even when their prey encountered mammoths, cave bears and urus; and hunters forced them to a high cliff. At the foot of the White Rock the Sarmatians used to live, and the big number of Scythian mounds are located on the plateau. There is a legend that once the sea was nearby, and Ak-Kaya was a cliffy shore to which the ships touched the land, and that the vertical rock walls even have kept the iron rings for berthing. The ancient legends are associated with the Altyn-Teshik cave (translated as the “golden hole”) located in the White Rock. According to one of it, the cave was the lie of the werewolf snake that brought here the beautiful women kidnapped in the district.

Located in the Great Alushta region. Although it is the second highest (after Roman-Kosh) but it is still considered the main one for the Crimea – this explains why before the revolution it was depicted on the peninsula capital coat of arms. At the highest point of Chatyrdag, at the top of Eklisi-Burun (1527 m height), the Greek Panagia temple admitted to the Holy Mother up to the 18th century. The Orthodox from the surrounding villages still ascend here year after year on the Easter eve and serve a prayer. In this place the people feel pacification and get filled with power. And some people say that the Holy Mother manifested herself to them here. They also say that you can make a wish on Eklisi: if it is earthy then it is necessary to appeal to the Holy Mother; if the desire is for the spiritual sphere, then appeal to God.

Protects the Southern coast of the Crimea from cold northern and western winds. And Ay-Petri shares the energetic zones of Southshore and Bakhchisaray region, that’s why there are plenty of abnormal areas. For example, in the rift near the Yuchan-Su waterfall a lot of people feel intense dizziness. And the so-called Drunken Grove (the trees are bizarrely bent here) is a geopathic zone itself, it is advised not to go here. But at the very top of Ay-Petri you can stand for a bit longer and make a wish turning your face to the sea.

Stone mushrooms of the Sotera valley

These are huge bizarre blocks with a height of three to seven meters. If common tourists come here to photograph the stone sculptures, then the followers of esoteric doctrines visit this place to energize and to find inner harmony.

The northernmost of the Crimean cave cities. Located near the Skalistayy village, Bakhchisaray district. Its exact creation time is still unknown, but not later than the IV century. Bakla is a silence and seclusion place. Man-made caves and natural grottos of this ancient city fit the best for prayers and meditations. Earlier the Buckla was guarded by a stone sphinx (a rock that resembled this mythical creature very much), but in the late 20th century it ruined and now only the Serpent rock guards the peace of this place – its huge stone head rises above the surroundings.