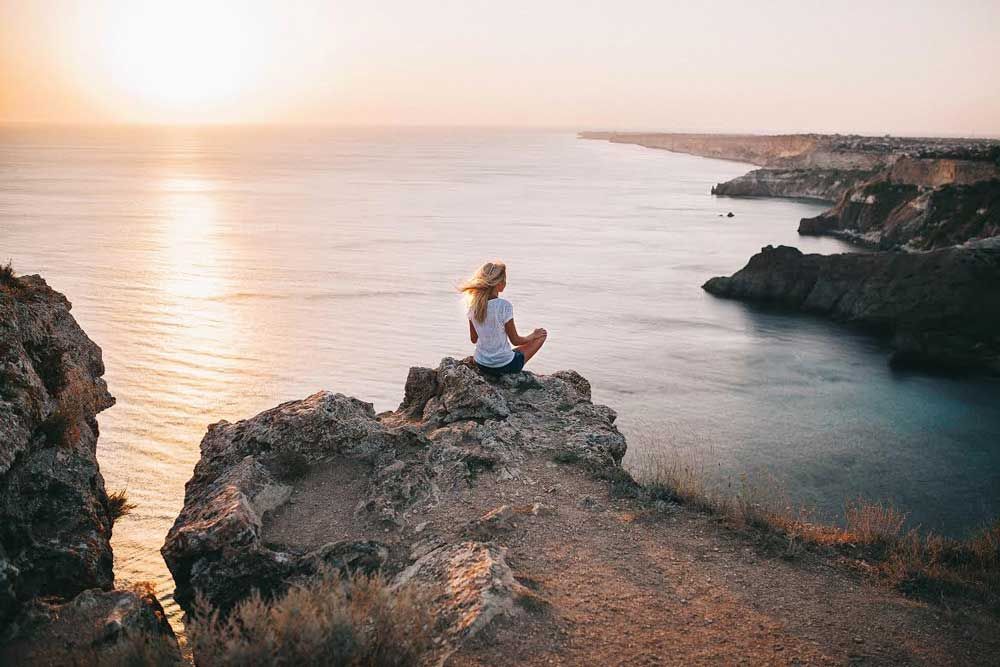 Crimea offers so much diverse resting for tourists that we can tell about it infinitely. “The Crimean Magazine” decided to reveal the beaches, which residents of the peninsula are used to keeping for “insiders”. These seashores are distinguished by their silence and meditative aura, there is no place for the blessings of civilization. People shouldn’t blame us for disclosing the “classified information”, as not every (even Crimeans) will opt for such not an easy format of leisure.

Let’s start with fantastic Balaklava. This cozy microdistrict of Sevastopol can well be considered as a standalone resort of the peninsula. There are a lot of famous beaches: Yashmovyi, Silver, Golden, “Inzhir” in Balaklava and its outskirts. However, the “Vasili” beach is even known by not all Crimeans, though all connoisseurs of real quiet recreation.

“Vasili” is a coastal pebble stripe of 300 meters in the Vasiliyevska Gulch, which is located one and half kilometer from the Balaklavskaya Bay. It consists of two parts. The first one is Eastern — it’s more accessible and global. A staircase leads to it. The smaller in size Western part hides beyond the rocks and it’s very simple to reach this area through a small passage along the sea. Usually, there are few people over here, thus you can rest in a close company and feel yourself like Robinson. The sea can be frequently of picturesque turquoise color. The most important thing, this place offers amazing views of the Aiya Cape.

A landslide located nearby is a disadvantage. Anyway, this phenomenon is common for many plots of land of the Crimean coast.

People can reach the “Vasili” beach in three ways:

Let’s pay some attention to the Bakhchisaraiskiy District, where the beaches of Peschanoye are located. Today, this is a quiet simple village, but its life was very busy long time ago. There was a fortress at the Kermenchik (translated as little fortress), which rises to the South of Peschanoye. The only city on the Western coast of Crimea and the second-largest settlement after the capital of the Scythian Kingdom Scythian Neapolis (current Simferopol) was built by Scythians right on the edge of the cliff at the end of the IInd century B.C.

But let’s return to the present. Unfortunately, the local beaches are developed with mini hotels, as these places become more popular both among tourists and native folks. Sure thing, as a coastal line pampers fans of sand and pebble. By the way, the water temperature, which remains rather high even after strong storms, is a special feature of the beaches of Peschanoye. This is because of a warm current.

We will tell about a wild beach, which lies at the foot of the mountain of Lukull. The road of extraordinary beauty leads there. You can go there in two ways. The first way is to go up the hill and enjoy overwhelming views. The second one is to walk under the mountain and feel yourself like Gulliver in the Giant Country.

The wild beach is amazing because of its special adventure spirit — tents, bonfires, lucky fishing and fragrant fish broth. Rapana and crabs are in abundance. You should definitely swim while it’s raining or after a storm, gather shells and see the sunrise. It’s only right that you will listen to the silence, walk barefoot across the coast, breath the wonderful salt air and even sunbathe nude. 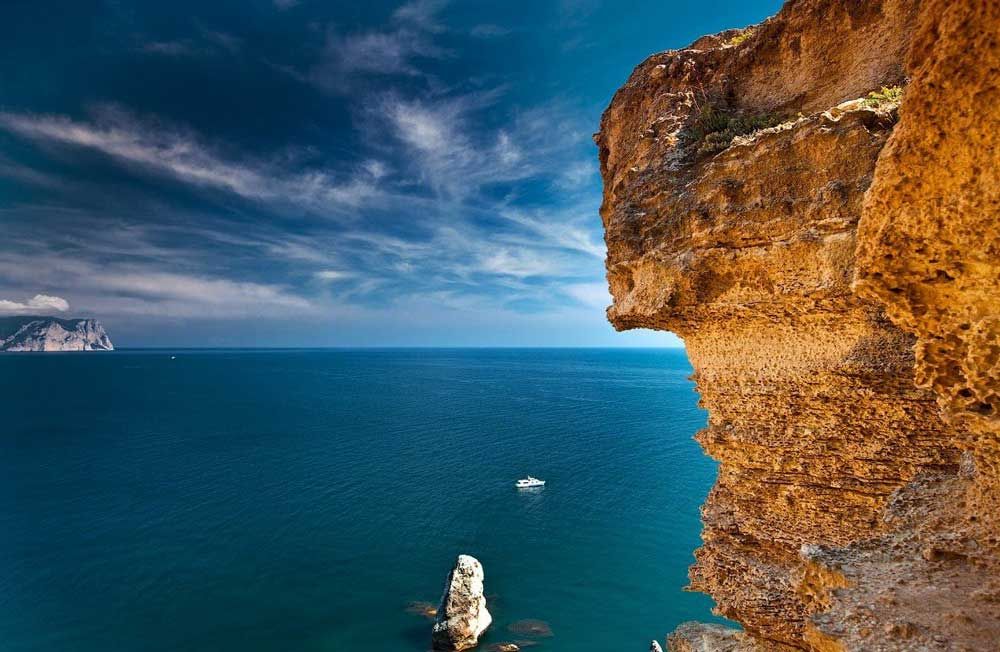 The beach of Belyaus that is a sand spit near Lake Donuzlav, which stretched several kilometers along, occupies a place in the range of the most unusual beaches of Tarkhankut. The white sand beaches of the spit are located between Yevpatoriya and Chernomorskoye, right in the place where the Donuzlav meets the Black Sea. The villages of Gromovo and Znamenskoye are the nearest settlements to the spit — approximately three kilometers from that place.

The landmark was named for the natural boundary called Bel-Auz (“ravine-river’s mouth”) in the Tatarian language. If you choose Belyaus for your rest, then Crimea will definitely seem a corner of paradise to you, where a sea is always full of crystal water. Another important thing — in comparison with Yevpatoriya and Yalta, you won’t meet a lot of people here. That’s why, it’s a perfect place for lovers of wild leisure. The sea is traditionally warm, though cold currents can be felt there, but it happens very seldom and not for a long time.

It’s interesting fact that in ancient times, this mysterious place was known as a fortified settlement built in the IVth century B.C. The fortress of Belyaus existed just three centuries. The settlement was built by Scythians and inhabitants of Chersonesus, who grew wheat and provide the metropolis with it. After the excavations of 1962, which were started here, people got an opportunity to see the remains of the fortifications and masonry of the medieval dwellings.

Several kilometers of the purest seashore, golden sand and fine pebbles make this coast line a desirable place for recreation.

The beach of Lyubimovka is one of the best in Sevastopol. It stands out for its width — from 50 to 100 meters. It’s almost prohibitive luxury for Crimea in recent years.

There is only a single disadvantage — the emergence of depth of the beach in Lyubimovka can be rather sudden. In the other words, when you enter the sea several steps away from the shore, the level of water will reach your knee. If you walk a meter — water will reach your neck and if you walk another meter — you won’t reach the bottom. That’s why, vacationers should keep an eye on their children here.

As for advantages, the sand and pebbles stretch in stripes along all the coast line: the closer to the sea, the more pebble you will see and fine sand is little far from there. Tourists, who like different types of beaches won’t dispute this topic, they will lay next door to each other. Actually, the coast isn’t interrupted for kilometers away in any direction. If noise bores you, you will be able to find a secluded spot on the wild part of the beach.

The beaches of Lyubimovka are divided into the following ones: the main beach, “garrison” beach and nude beach.

The first neighbor is the “garrison” beach. It’s a sandy area, but it’s a half-wild beach and separated from the village by a steep clay shore. The way to the nude beach lies right through it. This place is well-known among Crimean nudists and nudists from other regions. In contrast to different nudist beaches, the nude beach of Lyubimovka isn’t a cramped “reservation”. Quite the opposite, it looks like its sand shore goes to infinity vanishing in a wild surf and cries of unscared seagulls.

Tourists can go to Lyubimovka from Sevastopol from the Severnaya side by the local van № 52. You can reach Severnaya by a river tram from the heart of Sevastopol — Artbukhta — or go around by local buses.

Let’s turn to the Southern Shore of Crimea and go to Simeiz. Beaches of Simeiz located far from a village embankment are still one of undeveloped beaches, what means that they preserved their natural uniqueness. For instance, it’s a beach near the rock of Swan Wing or Kaush-Kaya. The rock, which is in common called Lebedinka, is one of three tourist attractions of the village on an equal footing with the rocks of Diva and Koshka. We warn you that climbing 96 m Lebedinka is possible only with assistance of alpinist equipment. From the old days, this plot of beach was favored by adherents of the movement “sunbathing without clothes”. It’s important to know that there are no stores offering beer and ice-cream, points of sun lounger rentals and amusements. You will have to buy food and water beforehand. Moreover, the beaches can’t be called friendly: stones and rocks are everywhere. That’s why only strong-willed adherents of leisure apart from civilization visit this area. The beach is located on huge stones, which allow to hide from prying eyes.

It’s quite easy to reach this place: you should go Lenin Street towards Koshka mountain. When the main part of Simeiz is behind you, you can easily notice a branching trail leading to the sea. This will be a way to the wild beach near Swan Wing. 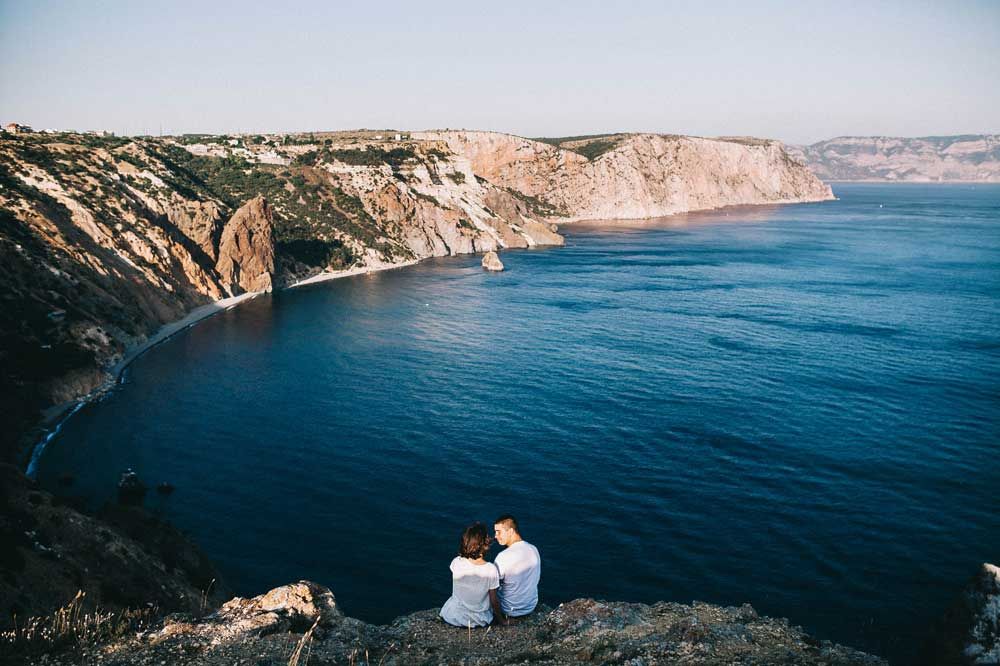 The Cape of Meganom is the sunniest point of the Crimean peninsula. Folks come here to meditate near yellow-orange ring shaped stripes, which emerge on the ground. They are called rings of power, UFO landing area, satanic spots… And perhaps it’s not for nothing. Some people assert that they feel apathy and fatigue like during a magnetic storm on this territory.

Meganom is a klondike for ghost hunters and people, who like to summon spirits. The cape is considered to be one of the most mystical places on the Earth. There is no such rich as it is in the SSC. The mountains covered with burnt grass are around.

Officially, the beach doesn’t exist on the cape, as Meganom has got a conservation status, but local know: if you want to enjoy crystal water and air — then you should go there. In doing so, the beaches with coarse sand don’t have any borders.

The landscape of Meganom and its outskirts is quite different from landscapes near Sudak and in the area of Karadag notwithstanding the fact that these areas are not far from each other.

There are no trees at Meganom, all the top of the cape is a steppe. Thus, it’s quite easy to get sunburned even in spring. Be careful, when you go there.

The air of this area is saturated with a smell of mountain Artemisia and marine algae. The caper plant is found here. Its fruit are capers, which are gathered by locals for preparation of salted foods. By the way, dishes from capers are served in the restaurants of France for a rather high price. In Crimea, they grow literally beneath feet.

Meganom is called “local Tunisia” because of its desolate beaches and the fact that it’s always almost sunny here. The sea is full of fish, rapana and clams. Fans of diving are recommended to visit the Bay of Gravernaya, where a mine is located at a depth of seven meters. There is a cemetery of different anchors, the collection of which ones is very extensive, on the bottom.

To visit the beaches of Meganom, you should go from Sudak to the “Kapsel” bus station by an inter-route van “Sudak-Solnechnaya Valley”. Further, you will have to walk along the road towards the sea and the Meganom Cape to the piers of the sea docks. There is an autocamping with summer coffee shops and pubs from the docks. You should go further the road. It’s easier to take a taxi from Sudak. If you don’t want to go up the road, then ask somebody to give you a ride to reach the place. A soil road from the Sudak-Feodosiya highway leads right to the top of the cape, to the military base. 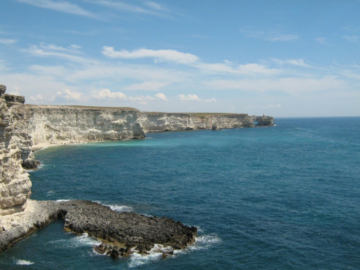 Weekend on Tarkhankut Peninsula: Calm and will 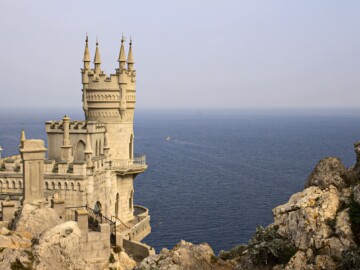 Experts appealed to the global community to ignore “crimean platform”
Смотрите также
Columbus of the Taurian land: Pyotr Pallas in the history of Crimea
Forgotten masterpieces: architectural monuments from the Crimean outback
Crucial decisions were made here: history of the governor’s house in Simferopol