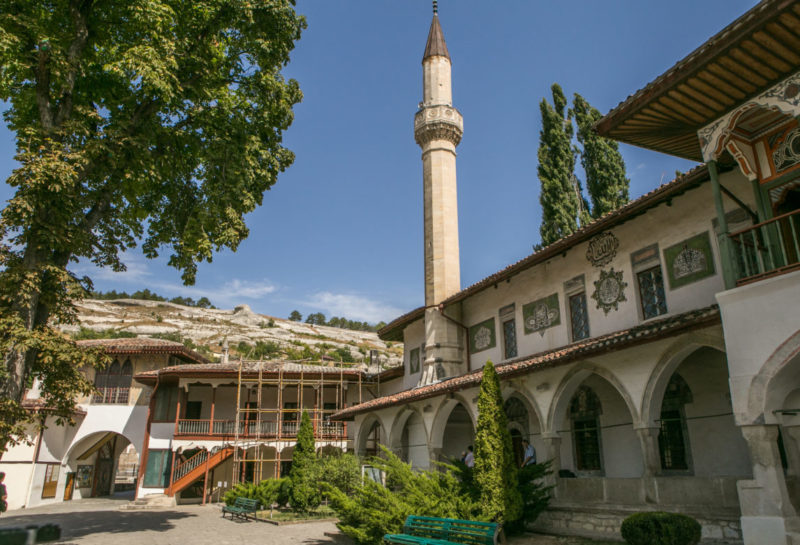 Every house and every street of Bakhchisarai is full of pieces of the national identity. Having researched historical and geographical peculiarities of the city, the “Crimean Magazine” has compiled a list of famous tourist places any traveler should visit to know more about Bakhchisarai, get familiar with its culture and enjoy the local nature’s landscapes during the inter-season period. Relying on reviews and feedback comments of Bakhchisarai’s guests, we have developed a two-day tourist itinerary.

Bakhchisarai was founded in 1532 by Sahib Giray the First. The total area of the city is 29,3 km2. The population of Bakhchisarai is 27,448 people.

1) Cultural and Ethnographic Center “Visit to the Crimean Tatars”

4) Inner yard of the hotel “Bakhitgul”

Saturday is the first day of our exploring trip.

Have some breakfast and research Crimean Tatars’ culture

Cultural and Ethnographic Center “Visit to the Crimean Tatars” always waits for new guests.  Here, you will be able to snack a little or order an hour and a half program including a course degustation, master class session and national suit dancing performances. In any case, tourists start their acquaintance with the culture of Crimean Tatars with a cup of aromatic coffee, which is considered to be a symbol of hospitality. The next point of the program is a tasting of courses of the national cuisine. All the offered dishes are cooked following recipes of XV—th century A.D. For example, little dumplings called yufak-ash. There must be fifteen of such raviolis in the spoon and only this cooking skill will show how good housewife and eligible bride a girl can be. Just imagine so super tiny dumplings! If you really want to dive into the culture of Crimean Tatars, so here you will be allowed to try your hand at the fictile art, dress national suits, cook yufak-ash and even learn national dances.

A big trade fair functions on the square near the railway station twice a week – on Sunday and Wednesday. Farmers deliver their fruits and vegetables to the local fair from different parts of the Bakhchisarai district, which is well-known by its gardens and vineyards. Various types of fragrant apples can be bought during this period of the year. It’s better to visit the trade fair in the first half of the day.

The Miniature Park of Bakhchisarai is located on the opposite street almost over against the Ethnographic Center. Inside of the park, visitors will see copies of famous Crimean sightseeing attractions, such as temples, castles, museums, palaces, country houses and even small wind turbine towers of village Chernomorskoye. Children are fond of this park. It’s rather obvious, as kids’ attention is attracted by a pets’ corner and large photo zone, where they are able to get a snapshot with characters of their favorite cartoons.

People say that a journey to Bakhchisarai without eating chebureks isn’t a tourist journey at all. Opposite the Khan’s Palace (Hansaray), an old public catering cafe built up in the Soviet period and well-known by its tasty chebureks waits for its new clients every day. The cafe was liked by many locals and coming vacationers. Several years ago, the building went through the reconstruction and currently it receives clients under the new brand name “Levante”. Dining at the cafe “Levante”, tourists will be not only eating tasty courses, but also enjoying an amazing view of the Hansaray.

The old palace is one of the main architectural landmarks of the town. The palace relates to the period of Crimean khans of the Giray dynasty and it’s the only example of Crimean Tatar palace architecture. We advise you to spend a couple of hours on researching a harem’s area, spacious royal chambers, familiarizing with the Falcon Tower, enjoying the expositions, resting at the fountains within the inner yard and especially see the most famous fountain “Fountain of Tears”. Alexander Pushkin reflected the ancient legend of this symbol of love, deprivation and desperate woe in his poem. The Russian poet was so impressed by the told story and after attending the garden, he picked two roses and left them on the fountain.

From the Crimean Tatar language, the title of the hotel “Bakhitgul” is translated as a beautiful flower. It was built in accordance with the traditions of the medieval architecture. A tiled roof, bright woven carpets with eastern ornament, figured tiles and vined pergolas are noticeable elements of a surround interior. However, the most beautiful piece of the environment is a unique view of the Khan’s Palace and long standing part of the town. To reach the hotel, guests should follow the sign points, while they are moving up the narrow streets of the old city and stop their climbing not far from the valley’s top. Landscapes you will see from the hotel room’s balcony can excite any person. The hotel accommodates a cafe and small outside museum, where visitors will get an opportunity to look at a real old Crimean Tatar house. The building has never been reconstructed or cosmeticized.

Now it’s Sunday and we continue our traveling around Bakhchisarai and its outskirts.

Have breakfast not far from Khan’s Palace

Currently, two world-famous sightseeing attractions of Bakhchisarai the Cave Town of Chufut-Kale and Bakhchisarai Cave Monastery are waiting for us. However, before we start our tourist journey, we will have to gather some strength. To feel yourself well-fed and rested, we advise you to snack at the cafe “Aliye”. It’s located not far from the Khan’s Palace and stands on several terraces. An inner comfortable yard is isolated from noise, so guests will hear only a purling of water in fountains and sounds of swishing leaves fruit trees make. You can make an order sitting under one of vined pergolas. The cafe offers courses of the national cuisine to clients. As rule, guests of “Aliye” say they don’t wait long for orders they make and all the dishes are very tasty.

Get acquainted with Bakhchisarai Cave Monastery

The temple is also called the Second Athos and heart of the Orthodox Christianity in Crimea. The monastery is situated in the center of the Mariampol’ Valley. There are five temples in the Cave Monastery. Nevertheless, the most well-know and visited one is the Uspeniy Temple, which is carved right in the rock. To reach the monastery, you will have to follow the uphill road. It will be the most difficult 400 meters of our itinerary. Don’t forget to take a bottle of water before going to the monastery. If you didn’t take it, then don’t worry. There is a natural water spring on the territory. Tourists dressed in an improper way are able to eliminate their clothing shortcomings with the help of head shawls and skirts, which can be found in a basket near the temple’s entrance. Of course, some monastic stores are open on the territory of the monastery, but you will not find resting or catering places here.

The town was situated on the plateau in a kilometer distance from the monastery. All steep rises are left behind. We can ensure you a Cave Town traveling will excite any person, who is fond of the Crimean nature. From the top of the mountain, tourists will get an opportunity to enjoy a perfect view of the Mountain Crimea. The Chufut-Kale medieval town-fortress is a real outside museum. Not so many people know, but the Cave Town was the first capital of the Crimean Khanate. Later, Crimean Tatars built up the Bakhchisarai Palace. Chufut-Kale soaked in the history of Alanes, Karaites and Crimean Tatars…

Supper time at the waterfall

Whatever the case, dear readers and potential tourists, but our journey is almost finished. The evening has come and we know you are tired of climbing and researching the Cave Town, so it’s time to get supper. In the Ashlama-Dere Valley, a cozy cafe is always ready to receive guests and provide them with a comfortable service. This catering place is also called “Ashlama-Sarai”. The cafe stands on several terraces right under the rocks. Oriental sweets and dishes are served for clients. When you enter the cafe, you will see a range of pergolas in the shade of the trees and a large artificial waterfall. Watching the water falls off the top of the rock, it may seem the liquid is going down right from the sky. 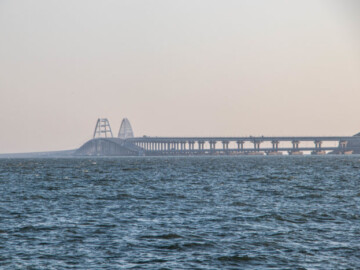 Weekend in Kerch: City near the Crimean Bridge 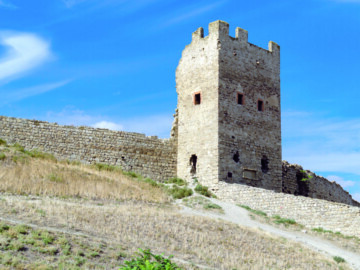 Weekend in Feodosiya: Fondled by God
Смотрите также
Columbus of the Taurian land: Pyotr Pallas in the history of Crimea
Forgotten masterpieces: architectural monuments from the Crimean outback
Crucial decisions were made here: history of the governor’s house in Simferopol