New patrol ship produced in Crimea was launched in Kerch

In the near future, a new ship will undergo state mooring trials. The Deputy Chief Executive Officer of the shipbuilding yard “Zaliv” Nikolai Nigrey stated about it at the solemn opening.

“Today, we are preparing the ship of future for launching. This patrol ship became the embodiment of the selfless labor of thousands of people, including engineers and workers. I respect it and I hope the ship will have bright future and prospects. After launching, it will undergo state mooring trials. In the near future, the patrol ship will join the Russian Navy”, — Nigrey noticed. 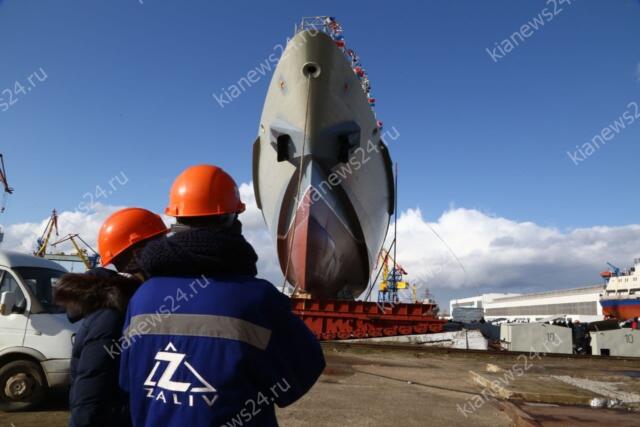 The Head of the Republic of Crimea Sergey Aksyonov visited the ceremony. He mentioned the new ship will be a point of proud for all Crimeans:

“Every new ship launching induces emotion. All this done is to improve the defensive capability of our country. In practice, the fact the ship is designed in Crimea and named after the Hero of the Soviet Union Sergey Kotov, the person who fought as a part of the Russian Navy and liberated the Republic of Crimea, is correct. I am glad for Kerch and for the fact the Russian Crimea is reborn as a center of the national shipbuilding”, — Head of Crimea said.