Participants of the Crimean Spring told us about life-changing events happened in February and March 2014.

Alexander Antufiyev, the commander of the special operations team of the People’s Militia of the Republic of Crimea:

“The Ukrainian military base A-2904 was taken under control by the forces of the People’s Militia on 13 March. It was the automobile battalion of the naval forces of Ukraine, which was deployed in Bakhchisarai. When I got there, I noticed the obvious disorganization in the ranks of the military servicemen, opprobrious language and aggression, including towards one another. I understood that I had to take control of the situation. I announced it loudly that the soldiers, who were ready to take an oath of allegiance to the people of Crimea, had to line up at the parade ground. They executed my order. The other military men, who refused to take an oath, were expelled from the territory of the base. I explained them then that there would be no going back, thus everybody had to choose their own path.

That moment we had another new problem: there were military servicemen, who were ready take an oath of allegiance, but we didn’t have neither the Crimean and Russian flags nor the text of the oath. It was very important to find the Russian flag. Suddenly, I remembered I repeatedly saw the Russian flags at the public events of the party “Russian Unity” headed by Sergey Valeryevich Aksyonov.

I phoned Mikhail Sergeyevich Sheremet, he acted as the commander of the forces of the People’s Militia, and asked him to help me. The oath ceremony was held. The oath was taken by 50 military servicemen of the Ukrainian army. Each of them read the text of the oath of allegiance to the people of Crimea standing before the line and holding guns in their hands. Later, all the military men and I moved to the polling stations to Bakhchisarai”. 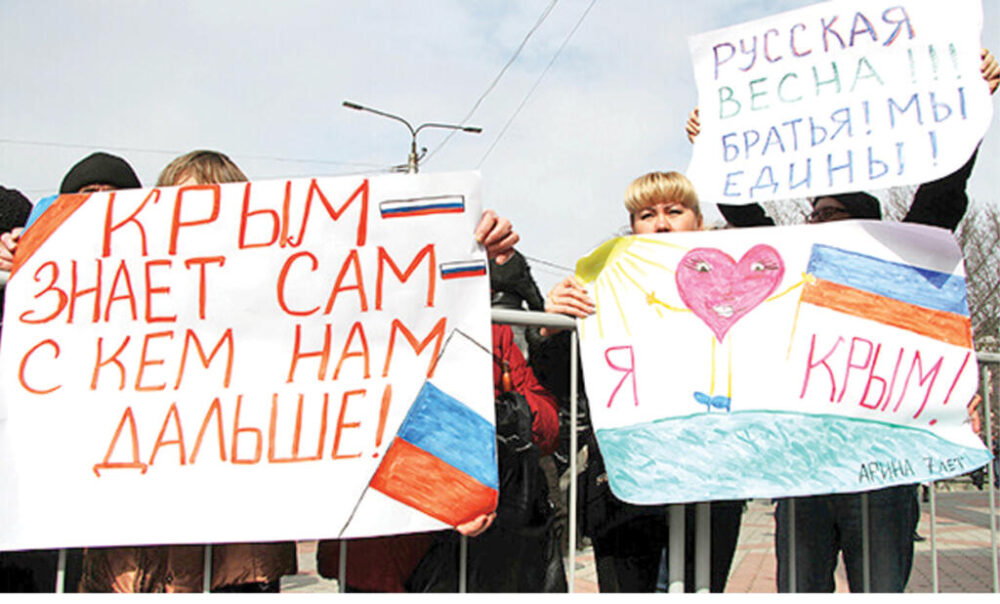 Alexander Bochkarev, the commander of the regiment of the People’s Militia of Crimea, recalls how eight buses with the unarmed residents of Crimea went to the anti-Maidan demonstrations to state about their position. However, the rebellion took place during those days. Crimeans understood that it was pointless to stay in Kiev and decided to come back to the peninsula.

“We tried to drive through Belaya Tserkov, but we stumbled upon the barricades. Then, we decided to move through Korsun-Shevchenkovskiy, but we got into a serious mess there. Our buses were blocked from all sides by unknown people, they opened fire and our driver was wounded. One of our guys was hit by the car and the vehicle ran over his head in my presence. He had a helmet on it, but the helmet was broken and his face got hurt. He sustained serious injuries. The attackers threw stones and Molotov cocktails at the buses. The men armed with shovel shafts, baseball bats, chains, hunting knives and even fire weapons claimed us to open the doors of the buses and made us come out one by one. The people leaving the buses were hit in their backs and knees, they were made crawling another several meters and laying on the ground with their faces pressed into the earth. The attackers bullied all of them…”

Alexander Bochkarev remembers that Crimeans saw and experienced all hating from those armed people. The exhausted and injured residents of Crimea, they finally came back to Crimea and decided to do all their best, but not to give the peninsula to such monsters. 16 companies of the People’s Militia were created, whose main task was to protect the public peace and safety of every citizen of Crimea.