7 little-known facts from the life of the great Aivazovsky

For 63 years he had been by the easel – and for those six decades he had produced about 6oo paintings. The native and beloved feodosia got a gift from him – his own house, which he transformed into the world-famous art gallery. He gave precious water to the feodosia residents, helped to get the railway into the town, built one of the earliest local history museum in europe. He was well-known and respected by all men – between simple workers and the highest ranking officials. And today “the crimean magazine” is writing about him – about ivan konstantinovich aivazovsky: seven little-known facts from the life of this great artist.

From being boy Aivazovsky adored music, he used to play folk songs on the violin. Recalling this, he drew himself with a violin, what is more the artist-boy sits on the floor, and keeps the violin on his knees – that’s how they keep the bow instruments in the East.

The landed property of Aivazovsky in Sudak was located near the dacha of the composer Spendiarov. And these two great men used to sit up often deep into the night: Aivazovsky played the violin, Spendiarov accompanied on the piano.

FACT № 2 «I GOT MARRIED AS A REAL ARTIST»

Aivazovsky was married twice. The circumstances of his first marriage in 1848 were very unusual. During one of his visits to Petersburg he was introduced to a grand widow who had two marriageable daughters. The girls wished to study painting from the famous artist. And after a while the widow started to notice that the artist stayed for too long at her house from time to time, aside from giving her girls painting lessons, he also arranges musical evenings, playing the violin to the accompaniment of her daughters’ governess. The widow was already guessing which of the daughters the artist would prefer (secretly hoping that it would be her to catch a proposal of marriage). However the imminent finale turned out to be in defiance of all expectations: Aivazovsky soon married a governess – Julia Grevs. Aivazovsky wrote in one of the letters: «Truly speaking, I married like a real artist, that is I lost my heart as never before. In two weeks everything was over. The best of my paintings are those created by inspiration, that’s how I got married. If and when necessary we spend the summer here, and only on 10 or 5 of August we are leaving for the Crimea for permanent residence”. Alas, it is the reluctance of Aivazovsky to live in the capital that led to the fact that Yulia Yakovlevna left him 12 years later, having however managed to deliver him four daughters during that time.

With his second wife the beautiful Anna Sarkisova-Burnazyan, Aivazovsky got acquainted at the funeral of her husband, a famous Feodosian merchant, in 1882. A year later they got married. Anna Nikitichna was 40 years younger than her husband and outlived him for 44 years – she died in Simferopol during the German occupation of the Crimea. 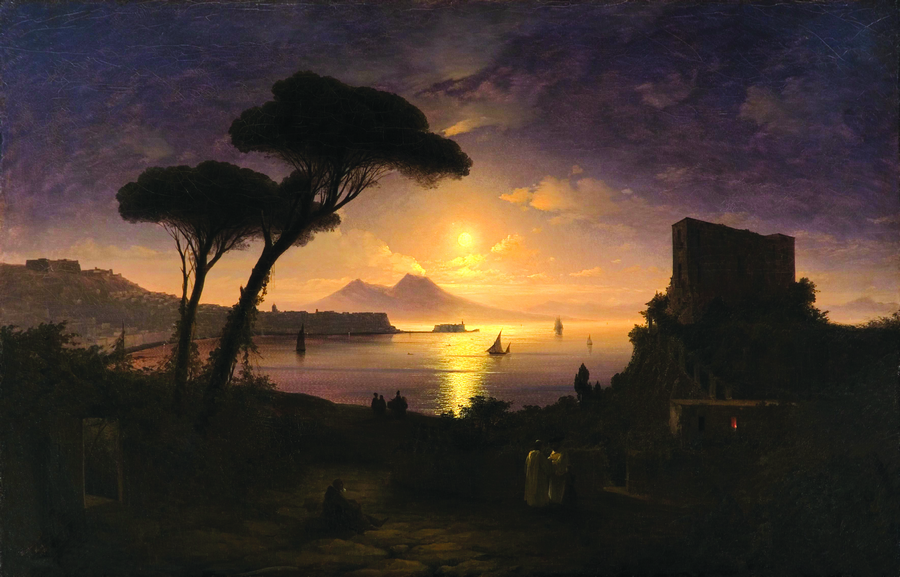 FACT № 3 THE GIFT OF THE ROBBER

Aivazovsky was adored by both the rich and the poor, and occasionally this love showed itself quite surprisingly. Once, when Aivazovsky was working at a workshop in his Shah-Mamay place, he was visited … by the legendary Crimean robber Alim. This elusive local Robin Hood (all the loot from the moneybags he hanged round to the helpless) allegedly told Aivazovsky: “You are known and praised by everyone. I have long wanted to see you. They say you create paintings. Can I watch?” Aivazovsky showed his paintings to Alim and invited an exceptional guest for a coffee. Alim sincerely thanked Aivazovsky, promising to definitely visit his wedding (the artist mentioned that he was about to marry). And he kept his promise: when the bride couple was approaching the Shah-Mamai, they were crossed by a rider – it was Alim. He congratulated the groom and bride, presenting her an expensive silk Turkish handkerchief, wished happiness – and speeded off.

Aivazovsky was seriously interested in archeology. In 1853 he officially submitted a letter of application to the Ministry of Domains for permission to begin archaeological excavations in Feodosia. After obtaining this permission, Aivazovsky together with the archaeologist Sibirsky started to work. The excavations of the first four mounds came to nothing, but the fifth Kurgan, at Cape Ilya, struck the explorers with their findings. They discovered the women’s burial of IV century B.C. As the artist wrote: “This finding gives us hope that the ancient Feodosia was at this same place. I’m lost in admiration of Feodosia!” Aivazovsky sent the precious findings to St. Petersburg, and now they are in the collection of the State Hermitage.

Altogether during the summer of 1853 Aivazovsky excavated 80 mounds. Gold earrings found by Aivazovsky during excavations in 1853, dated 330-300 B.C. and made in so-called microtechnics: each one has a multi-figure composition. The well-known jewelers of Petersburg and Paris tried to make a copy of the wally, but for nothing. Even the famous Karl Faberge, who tried to replicate “the Feodosia Earrings” had failed.

In 1871 with funds collected from the exhibition of his paintings in St. Petersburg, Aivazovsky constructed a building on the hill Mithridat for the Museum of Antiquities near the house where he was born (before that the museum’s collection was located in a small Turkish mosque). The name of Aivazovsky is also connected with the fate of the museum in the 20th century. In 1925 it was relocated to the former house of the artist (where the museum was located until 1988), connecting the art gallery in one institution. The building on the hill Mitridat was destroyed during the Great Patriotic War – supposedly from ship’s shell hit.

FACT № 5 THIRD IN THE COUNTRY

The Feodosia Art Gallery became the third one in the country. Before its unveiling, only two art museums in Russia were accessible for visiting: the Hermitage in St. Petersburg and the Rumyantsev Museum in Moscow. Both the Tretyakov Gallery and the Russian Museum were open for people about a dozen years later.

The ceremonial unveiling of the art gallery was timed to the birthday of Aivazovsky and happened on July 17, 1880. In the exhibition hall decorated with state and naval flags of Russia, the 23 paintings were allocated. And also copies of antique sculptures and busts of Pushkin and Glinka – poet and composer adored by Aivazovsky. The balconies of the gallery were decorated with models of famed ships of the Russian military naval fleet and stuffed sea birds.

Now the Art Gallery of Aivazovsky is located in the very center of Feodosia. But in 1845 when Ivan Konstantinovich was just starting to construct it (actually, the artist was building a house for himself, and only later it became a gallery), for this purpose he chose a deserted place on the city outskirts, on the seashore.

The nature of Russia was depicted by outstanding Russian poets, writers and artists. For many years the Crimea has been little-known outskirts of the country — and Aivazovsky’s artwork introduced this midday region to the Russian society. No wonder that during the meeting of the Academy of Arts dedicated to the 50th anniversary of Aivazovsky arwork, the explorer and traveler, the vice-chairman of the Russian Geographical Society Semenov-Tyan-Shansky said addressing the artist: “The Russian Geographical Society has long declared You as an outstanding geographical personality, the first Russian original artist of the sea which is called “the Russian Sea” in Russian chronicles (that’s how the Black Sea was called in the X-XII centuries. — Ed.)”. And indeed, besides the enormous artistic significance, the Aivazovsky’s paintings are of ultimate educatory value. If it had been possible to place the Crimean paintings of Aivazovsky in a certain geographical sequence, then one could have had an original trip along the Crimean shore.

Aivazovsky presented to his native city and the world not only values of a material nature let’s say. Konstantin Artseulov, the legendary Crimean pilot, was the first one in Russia who overcame the tailspin (in 1916 he learned to pull the plane out of such disastrous state) was the youngest, favorite grandson of Aivazovsky, the son of one of the artist’s daughters, Zhanna Ivanovna. Kostya early began to paint in oil and in ten years age already painted seascapes with sailboats and people. Grandfather willingly corrected his works, and sometimes even signed them. Buyers sometimes did not notice the substitution, which gave great delight to Aivazovsky.

Arceulov’s parents split up when he was very young and Kostya spent his childhood in his grandfather’s house, where he lived until the death of Aivazovsky. Kostya was the only one who was allowed by Ivan Konstantinovich to enter his workshop while working, — the rest of household were strictly forbidden to do that. But to follow in his grandfather footsteps Konstantin was still not destined — the love for the sky scored a victory (Artzeulov built his first glider being 13 years old), and he preferred the flying academy to the Academy of Arts.

In 1933 the famous pilot was subjected to repression and exiled to Arkhangelsk. He was rehabilitated in 1937. He did not return to aviation, but returned to painting, he became an illustrator. Artseulov designed more than 50 books, performed illustrations for such magazines as “Technics for Youth”, “Wings of the Motherland”, “Young Technician”, “Modeler-Designer”. Late in life, Artseulov wrote: “In my opinion, the profession of the artist and the pilot are close to each other, because in many respects they require from the man the innate or acquired features and qualities: a sense of space, movement in it, its pace and rhythm, a good eye and fine sense of color, power of observation, analytical attitude to the circumstances in the work, romanticism and entrepreneurial spirit, emotional sensitivity and thorough knowledge of his craft”.